In October, 2012, Anna Choi from the Harvard School of Public Health published a paper in the journal Environmental Health Perspectives titled Developmental Fluoride Neurotoxicity: A Systematic Review and Meta-Analysis.

This paper performed a meta-analysis of 27 studies from China, where the groundwater sometimes contains unsafe levels of naturally occurring fluoride. There paper finds a clear correlation between geographical regions with high levels of fluoride and lower IQ.

In January, 2013, the story was misappropriated by Joseph Mercola (the worst human being alive) in a Huffington Post article titled Harvard Study Confirms Fluoride Reduces Children's IQ. He uses the Choi paper to frighten readers into believing water fluoridation is unhealthy (it isn't), going so far as to call it "public murder".

I'm sure my readers can spot the fallacy in the Mercola article. It confuses exposure to HIGH levels of fluoride with the LOW levels added by water fluoridation. In the U.S., the target concentration of fluoride to 0.7 ppm. This places public water supplies within the "low dose" category for every single one of the studies used in the Choi meta-analysis.

Therefore, it's brutally false to claim this paper as evidence for any danger from 0.7 ppm fluoride.

The meta-analysis found the opposite to be true.

Water fluoridation, up to 0.7 ppm, is associated with higher IQ!

Remember, too, that correlation does not equal causation. Choi will be the first one to tell you that confounding variables can mask causation, or exaggerate a correlation when little or no causation is present, at all.

For example, high fluoride levels in water is an indicator of high levels of heavy metals, like lead and mercury, which have well-studied neurological effects. In the Harvard press release, Choi's co-author Philippe Grandjean even hints at this:


Fluoride seems to fit in with lead, mercury, and other poisons that cause chemical brain drain...

(I strongly object to the kitschy phrase "brain drain", but oh well.)

The other major flaw with the Choi meta-analysis is that it doesn't adequately control for other environmental sources of fluoride. For example, take the Guizhou province, where 10.5 million cases of dental fluorosis were reported in 2001. There, coal burning was suspected as the culprit for this poisoning, but it was later discovered that 85% of the air fluoride was due to local clay added to the fuel.

It stands to reason that regions where water fluoride is high, clay fluoride is also high. So, fluoride doses will be exaggerated due to the practice of mixing clay with coal. Not to mention dietary sources of fluoride, and fluoride as an environmental pollutant.

Clearly feeling the heat, Harvard released a statement on the fluoride paper in which they disclaim:


These results do not allow us to make any judgment regarding possible levels of risk at levels of exposure typical for water fluoridation in the U.S.

Anyway, studies have been done on the intelligence of rats, which show a lack of effect of chronic (high-level) exposure to fluoride:


Chronic ingestion of fluoride at levels up to 230 times more than that experienced by humans whose main source of fluoride is fluoridated water had no significant effect on appetitive-based learning.

Not to mention the mountain of evidence showing water fluoridation to be safe...

Sadly, this is far from the end of the story. The anti-science myth that water fluoridation will lower children's IQ was touted heavily in the political battleground of Portland, Oregon. There, legislation was recently introduced to add safe levels of fluoride to the public water supply.

After public outcry, this measure was put to a vote. Portland voters rejected the proposal to fluoridate by a 60% majority. Tellingly, one voter told the USA today:


I don't want chemicals in my water. I know that there are really no known health risks with it, but there's a lot of things we find out later in life really do have health risks.

First, there's the derogatory use of the word "chemicals", which demonstrates a popular fallacy called the appeal to nature. The implication is that the presence of fluoride in water is unnatural. However, as we saw in the Choi paper, China has a huge health problem with naturally occurring fluoride! The quote above demonstrates total ignorance of this fact.

Fluoride isn't some mysterious "chemical". It's just a fluorine anion. Fluorine is one of the top 20 most abundant elements in the Earth's crust. It's hardly unnatural. It's found in seawater at 1.3 ppm. Life has had to deal with low levels of fluoride since its beginning.

Second, although this voter is aware of no health risks from water fluoridation, she remains skeptical. She opposes water fluoridation on grounds of the precautionary principle. Perhaps she doesn't know that the practice has been in place for over 50 years! Really, precaution is an excuse. She's made up her mind that fluoride is bad, and no amount of evidence can meet her impossible standards. This is called denialism.

This voter may be well-meaning, if not critically-thinking, but her hypocrisy is two-fold.

First, she presumably trusts the government to remove toxic levels of certain elements from the drinking water (chlorine, arsenic, lead, mercury, and selenium), but has a knee-jerk reaction against the addition of just this one element: fluorine? Why...? (Special thanks to Kyle Hill.)

Portland already teats water with chloramine (LD50 = 935 mg/kg) for disinfection. Where is the huge billboard demanding this deadly toxin to be taken out of Portland's water supply?

Oh, right, because they're healthy...

Well, so is fluoridated water:


Today, even with the widespread use of fluoride toothpaste, mouth rinse, and professional fluoride treatments, fluoridation has been shown to reduce tooth decay by 18-40% among children and by nearly 35% among adults.

This is the point that anti-fluoridationists want you to forget.

Water fluoridation is healthy for teeth!

The dental health of Portland residents has been put at quantifiable risk by scientific ignorance.

Ironically, too, they've made a risky choice in the name of precaution.

Some voters may have voted against fluoridation because they were worried about their IQ points...

A while back, the Los Angeles Times ran an article by Neela Banerjee titled Internal EPA report highlights disputes over fracking and well water.

The article reports on a slideshow, produced by Isotech titled Determining the origin of methan and its effect on the aquifer which concludes:


Methane is released during the drilling and perhaps during the fracking process...

They were able to determine the source of methane by a technique involving isotopic analysis. Gasses like methane and ethane contain carbon. The amount of carbon-13 in these gasses works as a sort of fingerprint, and can be used to identify the source of the gas.

Isotech ruled out any biogenic source for the methane in 11 of the sampled wells, demonstrating that their gas contents originated in the Marcellus Shale, and Upper and Middle Devonian. 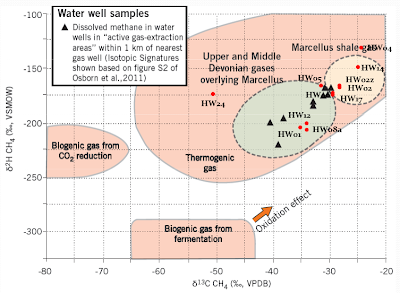 I'll be the first to say that the presence of Marcellus and Devonian gasses are in these wells is likely caused by fracking, for reasons below. It is worth mentioning, however, that the data in this report was very, very spotty. The report is NOT a peer-reviewed study. In each location, data recording started after drilling, so a causal connection can't be made. In addition to being spotty, some data may have be cherry-picked, as cautioned on slide 26:

Despite these shortcomings, I think it's safe to call this evidence of well contamination due to fracking operations, especially in light of the following corroborating evidence.

In 2009, within the time frame of the report, the Pennsylvania DEP submitted a modification to consent order and agreement where they stated:

At least two wells in the area were known to have bad casings, which can obviously allow gas to leak, and possibly get into nearby wells.

Sadly but predictably, anti-fracking bloggers ran amok with this story. Their false claims include conspiracy to censor the report, and that the results show dangerous levels of contamination.

They even got Yoko Ono walking around carrying a jug of brown water!

Steve Horn of Counter Punch said in Inside the Censored EPA Fracking Water Study that:


The PowerPoint's conclusions are damning.

Wait, what about these conclusions are so damning? See for yourself, in the infamous slide 25.

This slide shows methane at 65 ppm, while slide 5 shows the threshold limit value is 1,000 ppm. Arsenic levels are shown to be less than 10 ppb, which is the EPA standard for drinking water.

So, the drinking water is safe. The contamination is anecdotal, and was known about back in 2009.

Let's not take things too far. Let's not be like Mr. Sautners, who rejected the scientific evidence placed right in front of him, when the EPA told him his drinking water was safe. Sorry, no monetary settlement for you, Mr. Sautners!

We should also avoid the mistake of Tammy Manning from Franklin Forks, Pennsylvania. Back in 2011, her well water started to look brown. She had it tested and found unsafe levels of methane. Even after a science-based, fact-finding effort by the DEP definitively showed that fracking operations were not responsible for the methane in her water, Manning continued to blame others for her poor well quality.

Maybe there's another, natural explanation for the brown water in Manning's well?